Wednesday 25th May saw the annual Aubrey Memorial Cup Day.  For those of you who don’t know, Aubrey Houghton was an outstanding fisherman, and very well respected among the Janson Regulars.  Several years ago, Aubrey was sadly given the news that he has cancer and would only survive for six months, the owners at the time Jacqui and Andy Bullimore hastily put together a charity match for Aubrey thinking that he would not be around to see the day.  The cup then became an annual event and amazingly Aubrey was around to see every one of them, apart from sadly this years having passed away the previous month.

As you can imagine the day was tinged with sadness but also with joy remembering Aubrey at one of his favourite venues.  52 Anglers turned up to support the day.  After filling up on breakfasts cobs and coffee, the draw was done and off they went to their pegs, some happy with their draw, some not, but it was for charity so all in all a happy bunch.

Steve Davies a regular on the open matches at Jansons was one of the last the draw, a normal habit for Steve, there were only two pegs left, one on Match Lake and one on Tomo’s, of course Steve didn’t fancy the one on Tomo’s at all, being a regular on the match lakes.  So what did he draw, of course it was Tomo’s, I won’t go into the word’s he used, but you can imagine!!!  So off he trundles to set himself up on what he thought was going to be a dire peg, no matter that Jeff (Janson owner) having fished the peg alot, reassured him he would do well there, a few mutterings under the breath from Steve and he left him to get set up.

So whistle goes at 10 o’clock, everybody in,  within ten minutes, Steve’s mood had changed, and just got better and better throughout the day, all I heard for most of the day was a running commentary from Jeff about how Steve “has got another one”. We knew he would do well then, Jeff had already predicted the winner would come from Tomo’s, having spent alot of the past week fishing it in the afternoon’s and knowing how well it had been fishing.

So, five hours later and the weigh-in commenced.  Some big nets coming out of most of the lakes with the top weight on Donut of 53.00 for Steve Leadbeater, Match Lake 197.12 from Colin Spencer and on Munroes 233.02 for Mark Taylor who I am sure thought he was in the running for winning the cup, but unfortunately he didn’t know what Steve was upto.  So weigh in time for Steve came round and seven nets were to be bought up for weighing, one after the after they came and the final weight being a whopping 261.00lb, a new lake record for Tomo’s.

The day ended with a wonderful buffet provided by Caroline and Ruby, Aubrey’s daughter and wife, lots of stories were told, prizes given out, the cup handed over from last years winner Colin Spencer, raffle prizes collected and even an auction for a Preston Seat box.  The final total was an amazing £1570.00 to go to Marie Curie and Macmillan Nurses. Thank you to all that attended and supported the day,

Already looking forward to next years. 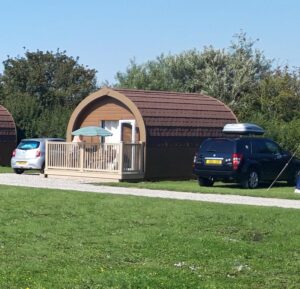 Why you should experience glamping this year during your “staycation” following the Covid-19 pandemic.

You see, many of us like to take a holiday every year. It’s one of the few things that we can still afford and is

Match & Munroes are now available on a Monday, Wednesday and Friday for practice sessions for a Club members that have a match coming up.

FEBRUARY 2018 Our new Match Lake ‘Aubreys’ is now dug and filled and the first stocking of fish completed.  This included 1000 Chub, 500 Ide,

PLEASE NOTE:  The fishery will be closed to Pleasure Anglers all day on the 2nd May due to a Charity Match being held at the

Janson Fishery launched the new site in May 2017.